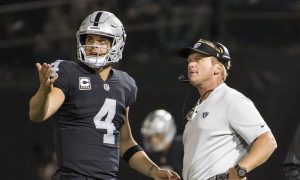 I’ve been asked before to add more images, so I thought I’d put an image specific to each week at the start of the rankings.   I chose Derek Carr this week, whose horrendous play cost me week 1.

First week is always a little wacky, so some big movements, but admittedly some teams were definitely punished more than others for poor performances.  This doesn’t feel very stable yet, and I have a feeling it’s going to be a chaotic first few weeks before the rankings generally settle in closer to how I ranked them in the first place 😉

1 – Up 1 – Jake & Elwood Blues – A team with a track record of recent success that seems to have nailed it in the draft.  If their WR depth is the Grand Canyon, their RB depth is a pothole, but J&E have made this strategy work before, and they know how to fill gaps on the wire.

2 – Down 1 – Blind Squirrels – On the surface week 1 looked pretty awful for Blind Squirrels, but they had tons of points on the bench, and had to suck up a -2 from the New Orleans Defense.  Slow start, but the addition of Hunt solidifies the running game, and they still generally look like a solid group. No need to panik.

3 – Up 3 – Niners R Metal – A massive 154 points looks good on the surface, but an 0-1 start is probably more befitting a team that got all it’s production from 4 players.  Always active, they already made a big splash in the trade market to address the WR position. The new look week 2 NRM should be interesting to watch.

4 – Up 4 – Z’Smashmouths – Soaring up the rankings, Z’Smashies are another team with a proven track record and they got consistent output from everyone on the roster in week 1.  This looks like a playoff team and the sky is the limit assuming David Johnson’s usage increases as the season goes on. I’m not sure if Zach will know what to do with a team he doesn’t have to completely recycle by the end of week 5.

5 – Up 2 – Congo.natty – Another team bolstered by a couple otherworldly performances from their running game, the final score looks better than the actual player by player results.  Losing Delanie Walker for the year and a setback for Devonta Freeman won’t help much either. Still, it was a solid week on the waiver wire, and above average RB production on a weekly basis is a reasonable expectation from this group.

6 – Down 1 – Miki’s Mokes – Just when you think a second round investment in Aaron Rodgers couldn’t possibly be any dumber, he TOTALLY REDEEMS himself.  Miki won’t get that reference, but the Mokes did get a week 1 win by less than a point.

7 – UP 3 – Ronan Machine – How many teams would have the stones to draft Alfred Morris in the 4th round, and then bench him in week 1 for Kenny Stills and Jordan Wilkens?  The result of those decisions was 140 point big summer blowout win. Not too shabby.

8 – Down 5 – Big Lunch – This Big Lunch looked more like bird seed and carrots in week 1.  This team has made a huge investment in players that can hopefully help them in 3 or 4 weeks, but will they have enough wins by then for it to matter?

9 – Down 5 – Kali Kine – It was a rough week 1 loss, but hoping to eek out a win with a bottom 3 score isn’t really a strategy anyway.  Yep, I worked “hope isn’t a strategy” into a power ranking. Why? Because I’m a manager, and managers say stuff like that.

10 – Up 1 – Sweet Baby Jesus – Usually the team to lose a one point game, no one is happier to see New Joe enter the league than SBJ.  Super shocked by the lack of running production, but you got lucky with Yeldon. The overall point total was quite nice.

11 – Down 2 – El Paso Roughnecks – A very nice performance in week 1, backing up the wise assessment that this was a solid starting lineup.  Too bad you didn’t have Desean Jackson in on the only week all season he’ll be worth rostering.

12 – No Change- New Joe – Rookies don’t move up the rankings by losing.  Sure, Jimmy Graham didn’t hold up his end of the bargain on Monday night, but as a Raider fan how do you look past your 9th round pick Jordy Nelson, and overthink it with 12th rounder Rashaad Maaatthews coming back from injury?  Lots of uncomfortable questions coming out of this finish, but 135 points is a very good week and a tough loss by any standard.